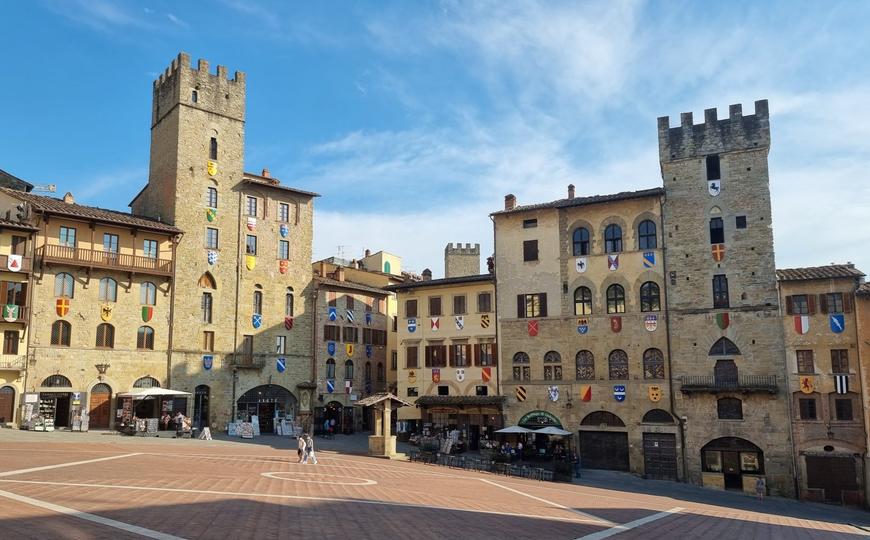 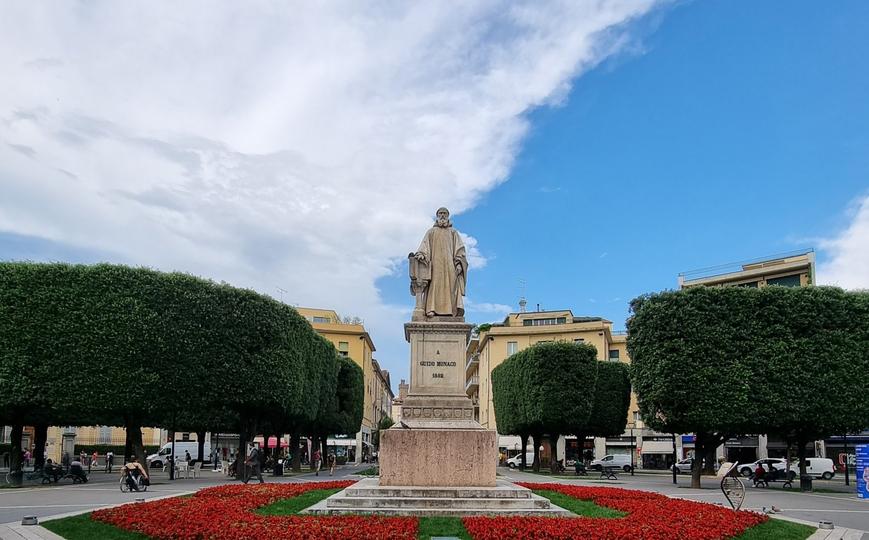 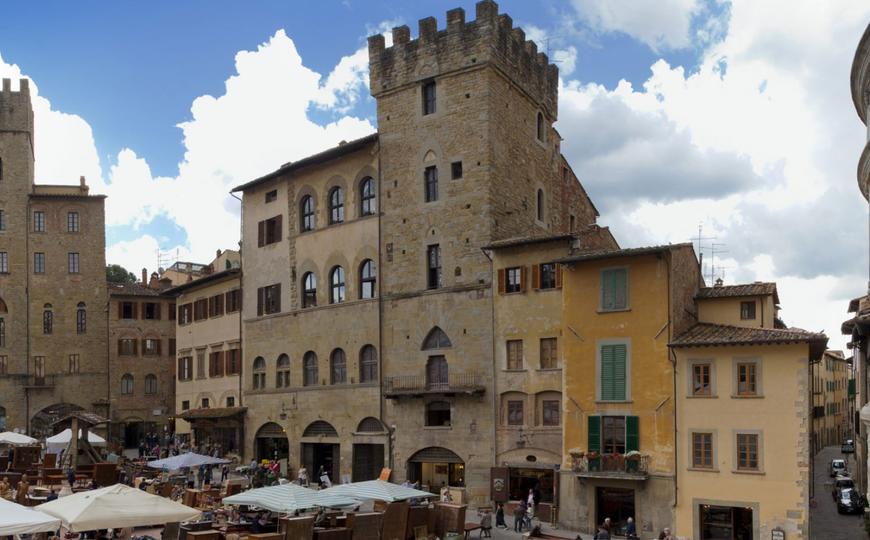 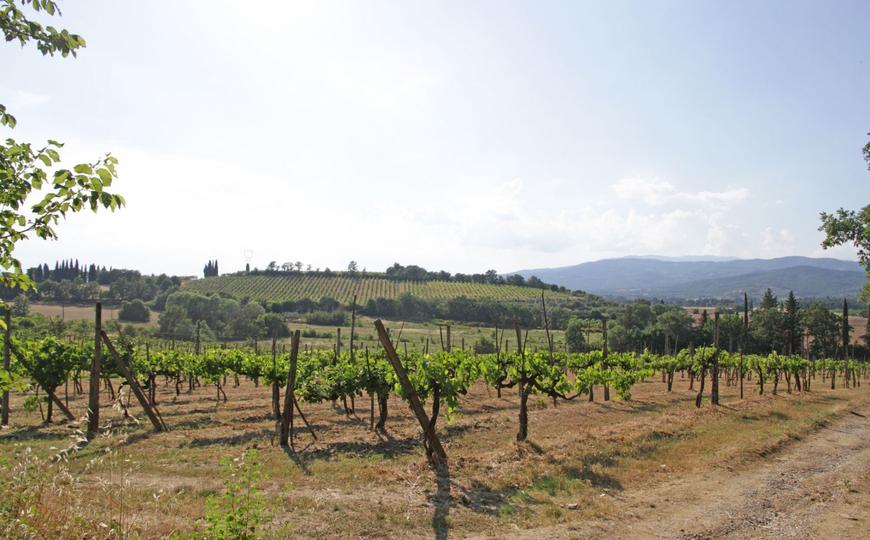 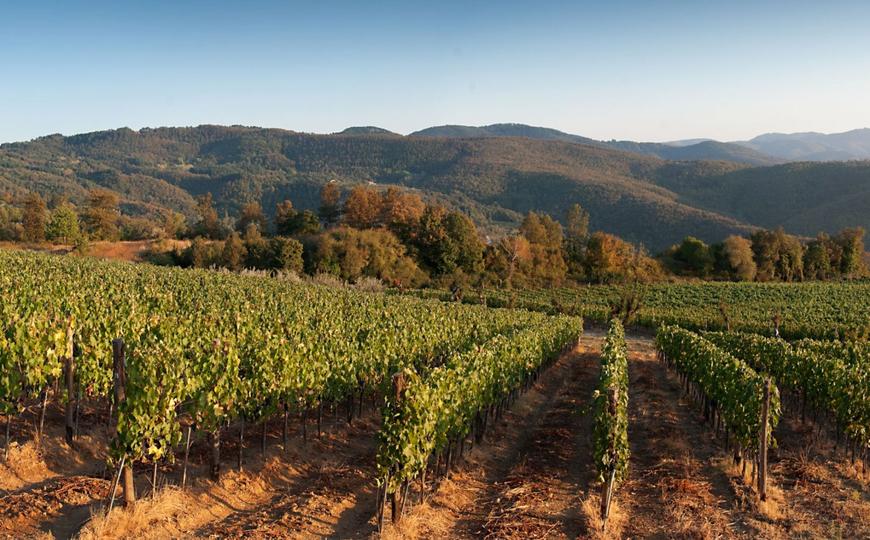 Arezzo, a city of about one hundred thousand inhabitants situated on a hill 296 m above sea level, on the border between Tuscany and Umbria, at the junction of four valleys. The territory of the municipality is very wide and varied: it ranges from the plains of the Val di Chiana to the hills, south of the city, and mountainous areas, especially to the east.

The city of Arezzo is located in a strategic position, well connected to the main Italian cities and close to both the sea and the mountains: only 1 hour and 30 minutes away is Monte Amiata, a mountain where it is possible to ski in the winter and hike and walk in the summer; at the same time, 2 hours away is the sea, which can be quickly reached on both the Tyrrhenian and Adriatic sides.

The cuisine
The Tuscan territory is rich in art, history and culture, as well as being known for its typical cuisine. Arezzo's cuisine is typically rustic Tuscan, based on grilled and barbecued roasts, game and poultry. Thanks to the peasant tradition and Umbrian influence, the tables of the people of Arezzo are always full of extra virgin olive oil, typical unsalted Tuscan bread, home-made egg pasta and fresh vegetables. Some typical dishes are Chianina meat, fegatelli (pieces of pork liver seasoned with bay leaves), crostini neri (slices of bread with a sauce made from minced veal and chicken livers) and baldino (a sweet made from chestnut flour).

Monuments
As can be guessed from the very architecture of the city, Arezzo boasts ancient origins and was first a major Etruscan city and then a strategic Roman town.

In a central position with respect to the city is Piazza Grande, the site of the Giostra del Saracino (a chivalrous tournament), witness to a variety of architectural styles: next to the two medieval towers, one can see the Vasariano Loggia, one of the most interesting Renaissance architectural works in Arezzo, and the Palazzo del Tribunale. In addition, Cimabue's Crucifix is preserved inside the Church of San Domenico.

The highest part of the city is dominated by the Cathedral, in Gothic style and containing works of art such as Piero della Francesca's La Maddalena, visible from the surrounding countryside thanks to its very high bell tower, and the Medici Fortress.

Not to forget the Roman Amphitheatre, elliptical in shape, built around the first half of the 2nd century AD.

The house of Petrarch, one of the greatest Italian poets of all time, is located right in the centre of Arezzo. When Dante Alighieri and Petrarch's father, Petracco, were exiled together from Florence, they went to Arezzo.

Events
The Giostra del Saracino is the main historical re-enactment in the city of Arezzo and every Arezzo citizen awaits it throughout the year. It takes place in the Piazza Grande on the evening of the penultimate Saturday in June and the first Sunday in September. The four city districts compete in the joust: Porta Crucifera, Porta del Foro, Porta Sant'Andrea and Porta Santo Spirito. The event attracts thousands of visitors, who, fascinated by the historical parade of ladies, knights, flag-wavers and musicians in medieval costumes, flock to the streets of the city.

In addition, every first Sunday of the month and the preceding Saturday in the magnificent setting of Piazza Grande and through the streets of the historic centre, the 'Fiera Antiquaria' is organised, one of the largest and most important antiques fairs in Italy.

Finally, every year from November to January Arezzo becomes the City of Christmas: markets, a Tyrolean village, lights, a Ferris wheel and many events for adults and children.

Curiosities
As well as being Petrarch's birthplace, the city of Arezzo was the setting for the 1997 film 'Life is beautiful', directed and starring Roberto Benigni, winner of three Academy Awards.

Restaurants
Throughout the province it is possible to taste typical Arezzo cuisine and wines.

Tuscan farmhouses
When one thinks of Tuscany, the classic rolling hills, dotted with cypress trees and typical stone houses immediately come to mind.

Tuscan farmhouses originated in the 16th century and were built as dwellings for the families of sharecroppers who worked the master's land. Generally, next to this building was the manor house, intended as the residence of the landowner.

Tuscan farmhouses, generally located in an isolated, country setting, are built of stone or mixed masonry, have two or more floors and feature the classic brick roof.

Depending on their past use, Tuscan farmhouses can be of two types:
- Residential: a single building with the stables and rooms for agricultural tools on the ground floor and the upper floors used as living quarters.
- Corporate: a main building used as a dwelling and one or more outbuildings used for agricultural activity.

The Arezzo variant is generally residential and in most cases has both a portico and loggias.