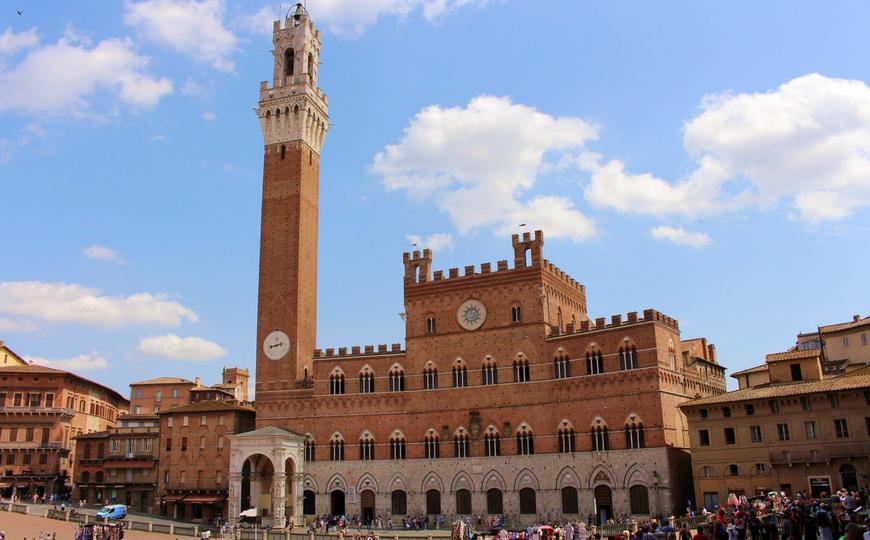 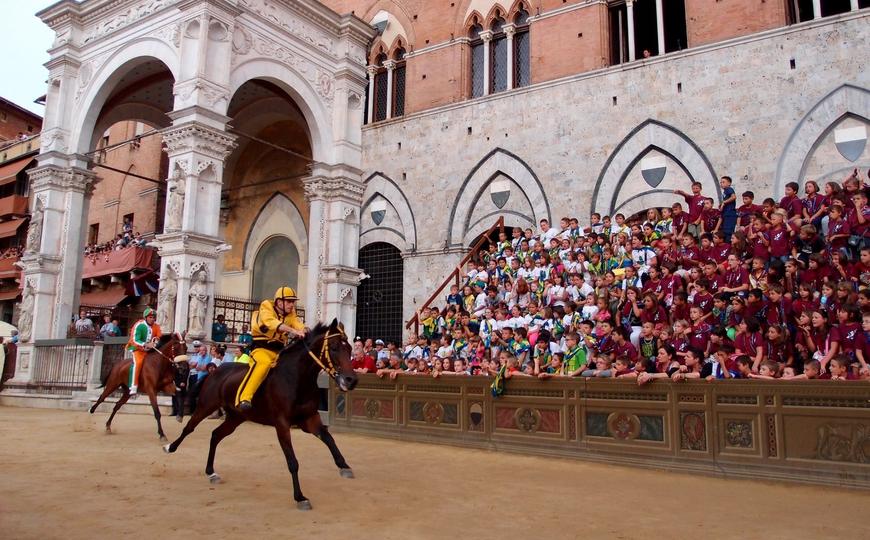 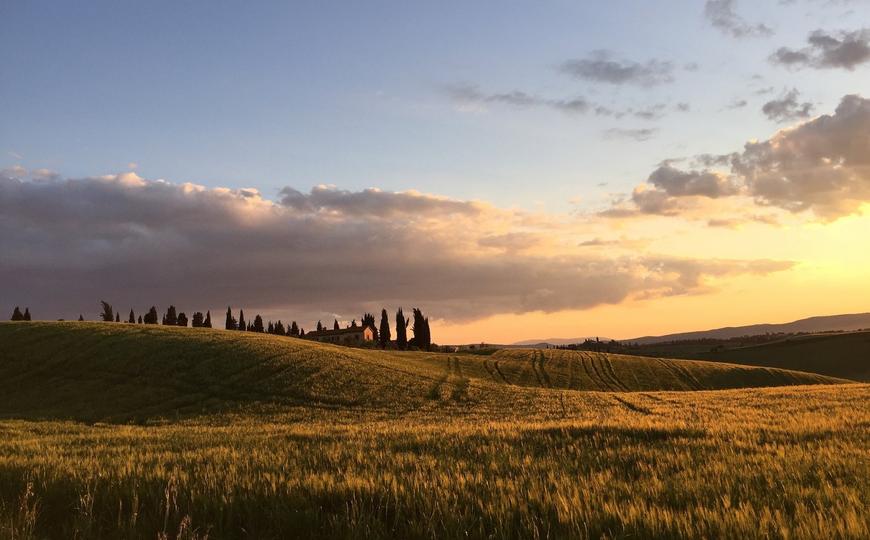 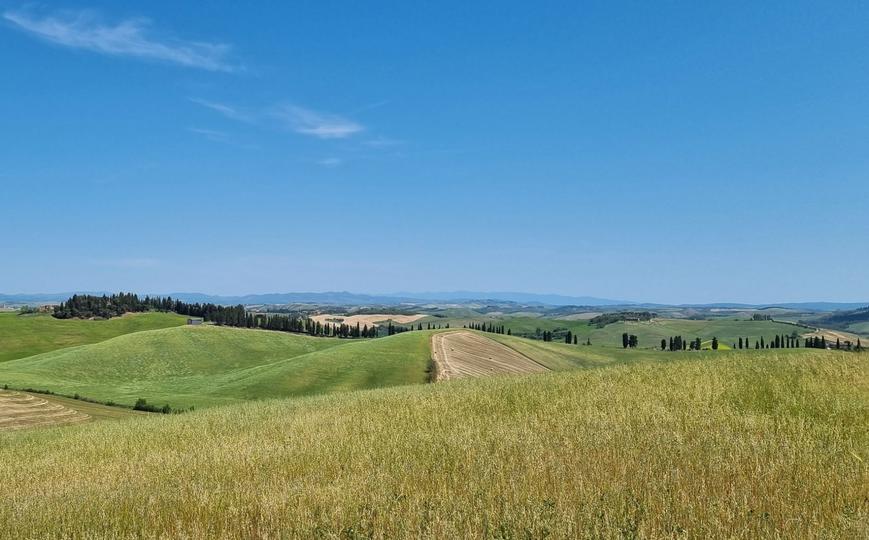 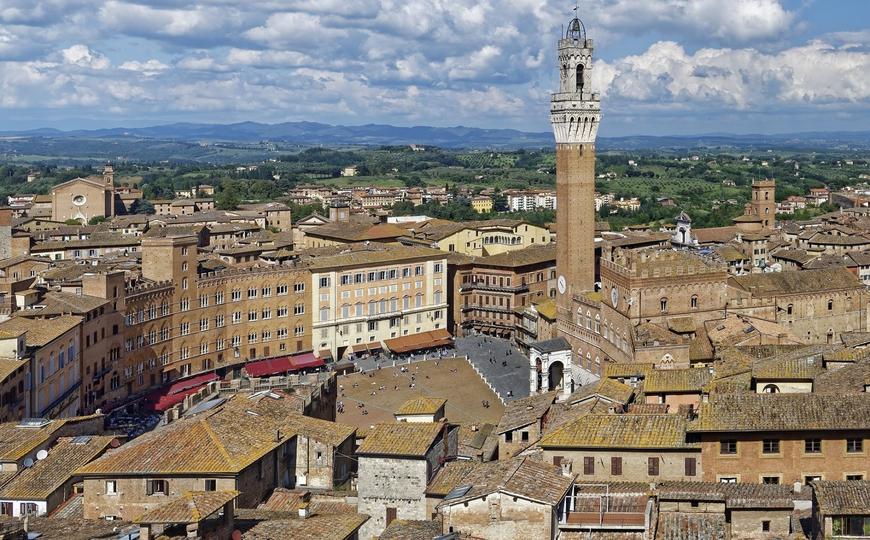 The city of Siena is a city in the centre of Tuscany of about 54,000 inhabitants, home to one of the oldest universities in Europe.

Framed by rolling hills, it stands on the top of three hills and has to the north the Chianti area, famous for its wine of the same name, to the south the famous Crete Senesi, known for their landscape and the town of Montalcino, and to the east the sea on the Tyrrhenian side.

Monuments
The historical centre of Siena has been declared a Unesco World Heritage Site: in its palaces, churches and squares it is still possible to feel its medieval splendour.

Piazza del Campo is the city's main square, home to the Palazzo Comunale with the Torre del Mangia, one of the tallest towers in Italy, and the monumental Fonte Gaia fountain. The square is renowned for its shell shape with nine segments and for being the setting for the Palio di Siena, a world-famous equestrian joust.

Other important monuments not to be missed are the Duomo, the Baptistery of San Giovanni, the Sanctuary of Santa Caterina, the Basilica of San Domenico, the Palazzo Pubblico with the Museo Civico and the Museo dell'Opera.

In addition, the city is crossed by the Via Francigena, a spiritual path that in the past led pilgrims from Western Europe to Rome.

Events
Palio di Siena is the main historical event that takes place on 2 July and 16 August each year and fully demonstrates how strong the city's connection with the Middle Ages still is. The event originated in 1200 and consists of a horse race in which 10 of the city's 17 'contrade' (historical subdivisions of the city within the medieval walls) participate. In the days leading up to the Palio di Siena, the horses that will participate in the race are selected and assigned to the contrade through a drawing. The race consists of three laps around Piazza del Campo, which is covered with tuff, clay and sand and into which spectators pour.

The race is preceded by the Historical Parade, consisting of almost 700 participants, including standard bearers, musicians and pages, which arrives in the square from the Prefecture.

Throughout the province it is possible to taste the typical cuisine of Siena and its wines.

Tuscan farmhouses
When one thinks of Tuscany, the classic rolling hills, dotted with cypress trees and typical stone houses immediately come to mind.

Tuscan farmhouses originated in the 16th century and were built as dwellings for the families of sharecroppers who worked the master's land. Generally, next to this building was the manor house, intended as the residence of the landowner.

Tuscan farmhouses, generally located in an isolated, country setting, are built of stone or mixed masonry, have two or more floors and feature the classic brick roof.

Depending on their past use, Tuscan farmhouses can be of two types:
- Residential: a single building with the stables and rooms for agricultural tools on the ground floor and the upper floors used as living quarters.
- Corporate: a main building used as a dwelling and one or more outbuildings used for agricultural activity.

Unlike the Arezzo variant, the Siena variant generally does not have a portico.

Discover the properties in Siena and its province